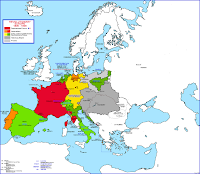 The grey section is the land that Austria had during at the end of its Empire.

It is good to note that Transylvania is part of Austria-Hungary-- that was what the Empire was known as. It was located close to the Romanian border.

Transylvania was part of Hungary, which was the Kingdom of Hungary in the Empire. This was before... World War I.

No, the land is not found in Africa, which was one of the questions I've been asked!