Did You see the Shield? The Shield of The Saxons of Transylvania 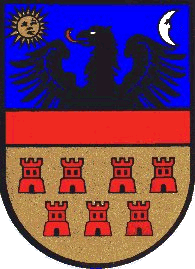 This is a reasonable reproduction of the Saxon people's shield. From it I want to point out the one part that is always pointed out to me. The seven castle in the bottom part. It is the symbols of seven castles.

In German Sieben is translated to seven , and burgen to castles, seven castles. Hence the name Siebenburgen. There are other symbols as the sun and eagle. This relates to the Kingdom of Hungary which for a long period of time held the land of Transylvania.

The Saxons of Transylvania would not only have this shield but would also build many cities in Transylvania.  They would also have their own faith in the Christian religion, that of the protestant belief of Martin Luther.

The Hungarian people of this land were known by a different name.  The same holds true with the Saxons, as not all Germans who lived in the borders of Transylvania and the Banat were in fact, Saxons.