So What About Royalty? 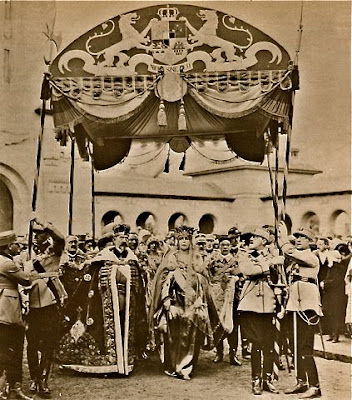 Queen Maria of Romania was royalty, and what royalty she was. A Granddaughter of Queen Victoria on her father's side and a granddaughter of Tsar Alexander II of Russia on her mother's side.
Then she became a princess of Romania, until 1914 when he became Queen of Romania, when the King of Romania, Carol I died. Her husband Ferdinand became King.
Yet some say she was the stronger of the two.
This picture is from their crowning in Alba Iluia, in 1922. Why did it take so long? The First World War. from 1914-1918 and then the Paris Peace Conferences. Transylvania became a part of Romania in 1919.
Royalty Transylvania