Transylvania and Music and Writing 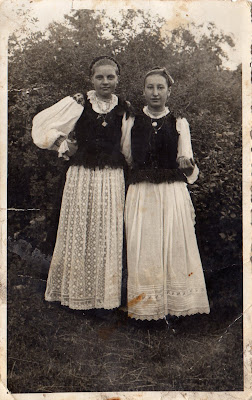 Do you recall the old VHS tapes? Well I found a few in German on Transylvania. It's really quite next these old box searches.

I've also found some old books from Transylvania that the family took with them and some diaries in the old Saxon "Writing" (given it's a dialect of German...)

Still it's interesting to read, as it is also is written in Romanian and Latin, and it seems to me, Russian, since it look Cyrillic.

I am wondering why Russian? this was written before the Second World War. Although it could be Greek.

The VHS tapes are awesome, not great quality but really nice singing and dancing. Boy can these people dance. it is dances from the Northern part of Transylvania so I wonder if each area had a unique dance. My guess is they probably did.