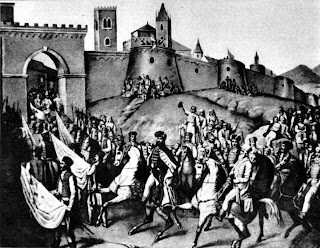 Romania is a big part of Transylvania now. More to the point there are a lot of Romanians who are living in areas once dominated by Germans or Hungarians or Jewish populations. This is not to suggest that there was not Romanians who lived within Transylvania before 1919. Or even before that time, just the newer influx of Romanians.
Alba Iluia is a great example, Michael the Brave, who was able for a shot time to bring the three provinces of Wallachia, Moldavia and Transylvania together came to the city of Alba Iluia. In fact Queen Marie of Romania and her husband King Ferdinand were crowned there as rulers of Great Romania.
Still, when reading the history of Transylvania, it seems that relations between Bucharest and Transylvania have not always been so great. Take 1989, for example. Yet, when I read I can find two differing version of Romanian history. One comes form Transylvania, and the people whose families have lived there for a long while, the other from Bucharest.
Still this ends up with me asking this question of when does Transylvania mean a debate? really it is two different versions of history. One of which glories in all things Romanian and one which seems to deal with the people of Transylvania, Romanian and all.
I wonder, how many people would sooner learn about the other cultures than who should have rights? I suspect i am alone in that thought.
People Romania Transylvania