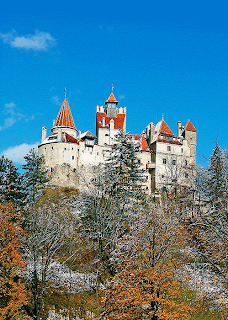 Before that time, the Teutonic Knights had built a wooden fortress in the area, which was burned by the Mongols around the year 1242.

It rose to fame again when it became a principal residence of Queen Maria of Romania.  The main links to Vlad Tepes is the fact that the castle was in the possession of Mircea the Elder, who was grandfather to him.

Now the castle is a monument (better still a museum) to the people and the area, and the descendants of Queen Marie of Romania.  In fact it is the use of photos that gave Bram Stoker some idea of how the castle looked, but for the inside, he based the castle upon the catacombs found in London, England.