A Start to Transylvania : The Dacians 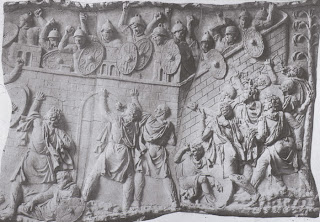 This mural depicts the Dacians and Roman wars.  Now, for many people this doesn't mean much-- after all, for some Transylvania really comes into focus in and around 500 years ago.

The Roman Emperors wanted the natural resources which Transylvania had to offer to Europe.  The Dacians held the land, and there was a small war.

All for the Gold.  The Romanians today have made Alba Iluia a strong point for their history in Transylvania, and this was a Roman outpost.

The Dacians, were according to some, killed off.  According to others they retreated and became the Romanian peoples of today.  Both theories are plausible, as the Romans would need slaves to build and mine their resources.

At the same time, the Dacians are a strong part of Transylvania's history.  Later groups would shape the course of life in the area, such as Hyundai, but this is the starting point for many.
Cities of Transylvania gold History Natural Resources Romania Transylvania