Biertan and One of Its Famous People

Posted by Rebecca A Emrich on December 29, 2011
Biertan and its population were small in comparison with other cities in the area of Transylvania.  At the same time it too has its share of famous people who lived there.  Since the city was populated mostly by Transylvanian Saxons, this is a historically important city to them.

The most famous of the recent residents of Biertan is Artur Phelps, a commander in the Austro-Hungarian Army, an officer in the Romanian Army and later a member of the German Army.  He was killed in action in 1944.  He was a decorated soldier, and was instrumental in ordering the evacuation of the Saxons of Northern Transylvania.

Biertan is a UNESCO heritage site and, as such, is an important location for many people to visit in Transylvania, Romania.  Notably, the Saxons often have reunions there in the city.  It is a city in Transylvania where the importance of what it is - a huge medieval fortress - is overshadowed by other cities which are around the area.

One of those is Sibiu. 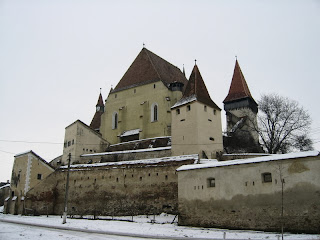