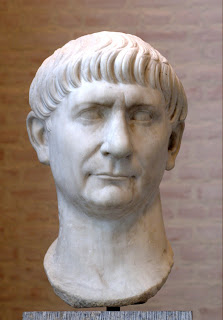 The Emperor Trajan of Rome was a man who expanded the Roman Empire.  Since this blog is about Transylvania, one might wonder why I even mention him.  After all, the Roman Empire was centuries ago, and Transylvania was a part of the more modern Hungary and The Empire of Austria. (This was also known as the dual Kingdom or the Austro-Hungarian Empire.)

In fact in Rome, there is mention of Transylvania in a rather indirect way.  The Dacians who were a group of people who lived in Dacia, and this Kingdom was in the general area of Transylvania.  Trajan fought with these people and would nominally conquer them.  They went on to build cities there- including Alba Iulia.

Over the years, as there more fighting happened within the borders of the Roman Empire, this led to the slow retreat of Roman influence in Transylvania. However, there are still reminders of that influence.

The aim of the fighting was to gain control of the gold mines in Transylvania.  To this end, he did defeat the Dacians.  Trajan had a column built and part of that column depicts the battle between the Romans and the Dacians.  This is called Trajan's column -- it can still be seen today. 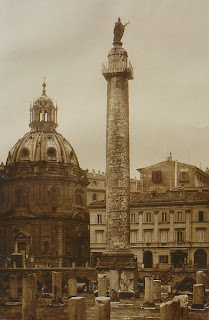