Van Helsing... I consider it to be a great movie — when I look at it as a movie. I found a lot of trouble with consistencies throughout the movie and the mythology of the movie. This movie has some interesting ideas, but looking at the message under their ideas really makes a person look at the movie in a different light. 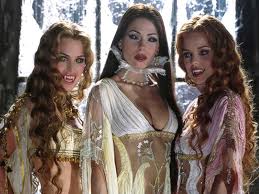 One of the biggest things I noticed in the movie actually happens more towards the end, when the children of Dracula came to life. They looked like little bat like creatures. The thing is, Dracula and his wives were all human at first. Okay, sure, eventually they all became vampires and could take on bat like forms, but those are not their natural forms. One would think that the children would be born/hatched looking a little more humanoid. Sure, the children can still have some bat like features, since they are born vampires. I just still believe that they should have been born more humanoid. They could have been given the ability to shape shift like Dracula and his wives. 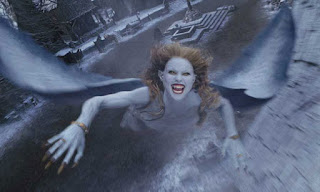 It is interesting to look at one of the messages being told through this movie. It is pretty much centred on the fact that Van Helsing is the only one who can kill Dracula and the fact that Van Helsing is Gabriel, one of the archangels. This means that only a servant of God is able to kill Dracula. No one else had the ability to do this. Over four centuries one family devoted all of their time and energy, even their lives, to finding a way to defeat Dracula. Then, Van Helsing walks in and within a few days, no more than a week, he is able to find things out, and kill Dracula, all by using maps to find Dracula's Castle. He did not even know who Dracula was before being given the job by the monks. This message could be interpreted as saying that servants of God are better than everyone else.

Now, to look at the choice of actors in this movie. Hugh Jackman is an amazing actor. I felt that he was great in this role. He was able to take on the role of the brooding man very well. Kate Beckinsale, kind of let me down. Her accent did not seem to always be the same scene from scene. It was also different from, and stronger than, that of the local villagers. One would think that the accents of the villagers would be stronger than that of the noble house. There is also the fact that she did not really seem able to stick to one role. One minute she is a strong confident woman, in need of no man to help her, and the next minute she is like a damsel in distress, needing Van Helsing to save her. Granted, this could be a character flaw and not the fault of the actress at all. They may not have been able to decide how they wanted their character to react towards different situations that she had to face.
Castles Dracula Transylvania Werewolves