You know how some families have the same traits; That these traits just seem to infect a lot of members of a family all the way down the line? They slowly become what we refer to as family traits. Well, I believe that the Tepes family have the family trait of being ambitious. By the Tepes family, I am referring to all those related to Vlad the Impaler. His father had ambitions of becoming the Prince of Wallachia. He even made his way into the Order of the Dragon to help make that ambition a reality. Vlad the Impaler had the ambition of keeping the throne of Wallachia within his family. He may have lost it repeatedly, but he also recovered it repeatedly. But, I have already posted about both of these men. Now it is time to talk about the women of the family. I have already talked about Countess Elizabeth Bathory, The Blood Countess. This time I want to talk about Mary of Teck, the future Queen Mary of the United Kingdom.

Mary of Teck is thought to be descended from either Vlad the Impaler himself or his brother Radu. She was born on May 26, 1867. She was from an upper-class British family. She was a distant member of the British Royal family through her mother. Since she was a distant relative, though, they were not that well off. Actually, during the time between 1883-1885, Mary of Teck’s family fell into a lot of debt and had to live on the continent with relatives. During this period, Mary helped out by serving as her mother’s unofficial secretary. She was only 15 when she started doing this. 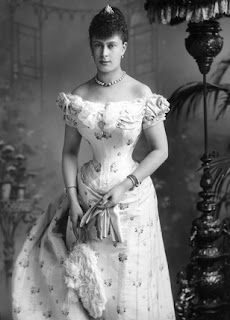 Mary of Teck was not unlike the other Tepes family members of the past. She was an ambitious girl who had her sights set high — the British Royal family to be specific. At the age of 24, she was engaged to Albert Victor, Prince of Wales. This match was encouraged by Queen Victoria, who was fond of Mary. Now unfortunately, Albert fell to the influenza epidemic of 1891-1892 a few weeks before he and Mary were to marry, and he died. It was during her period of mourning Albert that Mary became close to his brother Prince George. In 1893, that George proposed to Mary, and they were married that year in July. Something to consider is that the proper mourning period is one year, so, in other words, Mary waited just the appropriate amount of time of mourning before moving on. Her ambitions never failed. She did become Queen of Great Britain. 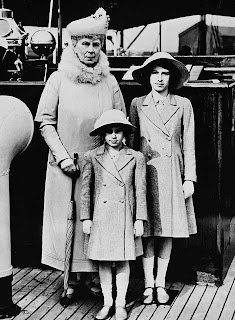 Something to take from this is that Mary of Teck is the grandmother of Queen Elizabeth II, the current reigning Queen of the United Kingdom. It was actually just ten weeks before Elizabeth’s coronation that Mary passed (in 1952). It is said that Mary thought of duty above all else and was dedicated to her role as Queen of Great Britain. There is a story going around where Prince Charles is supporting the genetic link between his great-grandmother and Vlad the Impaler. He is fighting for his stake in the future of Romania.  As a bit of interesting trivia — the Romanian Royal Family have no connection to Vlad — Queen Marie of Romania was a first cousin to George V.